WINCHESTER — Why did Lois A. Kirkwood leave more than a million dollars to a charity that had never even heard her name?

Friends say they don’t know the answer, but then again, they weren’t necessarily surprised that she did. 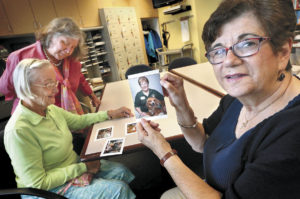 The 74-year-old Kirkwood, a retired nurse from Northern Virginia who moved to Winchester following a 30-year career at Inova Fairfax Hospital, succumbed to cancer Nov. 25, 2016, and left her entire estate to charity.

The biggest beneficiary was the Community Foundation of the Northern Shenandoah Valley, a nonprofit organization in Winchester that manages 76 separate charitable funds and had no previous dealings with Kirkwood. 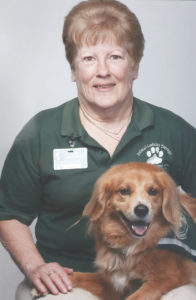 Foundation Executive Director Debbie Connolly announced last week that Kirkwood, for reasons known only to her, bequeathed $1.1 million to the organization. That, along with other donations this year, helped raise the organization’s total endowment from $1.6 million on Jan. 1 to its current level of $3.2 million.

“I heard that and said, ‘She did what? How much? Oh my goodness!’” said Patty Hoover, who attended Mount Olive United Methodist Church in Frederick County with Kirkwood.

Hoover, who also did housekeeping for Kirkwood, said she wasn’t surprised to hear what Kirkwood had done, but was taken aback by the size of her friend’s estate.

The people who knew Kirkwood said she didn’t put on airs, and she never flaunted her good fortune.

According to Kirkwood’s obituary from Omps Funeral Home, she graduated from Falls Church High School in 1960, earned a degree in nursing from Duke University and served as a nurse in the U.S. Army in Okinawa, Japan.

When she returned to the United States, she married James L. “Jim” Kirkwood III on May 6, 1967. Jim Kirkwood, whose obituary said he retired from the U.S. Naval Research Laboratory in Washington, D.C., died in Frederick County on May 12, 2007.

The couple had no children or immediate family.

“They worked for years and socked [their money] away,” said Jenny Powers, who volunteered with Lois Kirkwood in the Animal Assisted Therapy program. “She didn’t dress flashy, didn’t wear expensive jewelry.”

No one knows for certain why the Kirkwoods moved to the Winchester area, but friends speculated it was because it is a nice place to retire, with lots of activities and attractions.

Even though she had retired from nursing, Lois Kirkwood never lost her passion for helping others.

“She was the type of nurse you’d want at your bedside,” said Doris Trant, director of volunteer services at Winchester Medical Center. “She was very giving, connected very quietly with folks. She cared about humanity.” 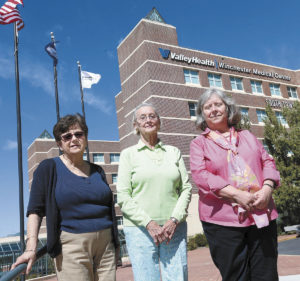 Lois Kirkwood became an active volunteer at Winchester Medical Center, working in the gift shop and patient desk area, helping with the hospital auxiliary’s scholarship committee, and signing up for the Animal Assisted Therapy program.

“She was a great volunteer, wherever she was,” said program volunteer Carolyn Griffin.

Lois Kirkwood and her adopted dog Lucky joined Animal Assisted Therapy in 2001. Burkhart remembers being struck by the pair’s bond as they went through an arduous two-year training process.

“Lucky never let her down, and always came through with flying colors,” Burkhart said.

“Lucky had the same personality that Lois had,” Trant added. “Very happy and giving and easygoing, just the sweetest disposition.”

Later on, Lois Kirkwood adopted another dog, JoJo, and brought him into the Animal Assisted Therapy program as well.

Burkhart, who retired from the program in 2015, said she used to be in charge of scheduling volunteers for the program. When Burkhart broke both arms in an accident, Lois Kirkwood stepped in to handle the scheduling and even administered Burkhart’s allergy shots.

“She was a very giving person. I never saw her in a mean mood, in an upset mood, in a retaliatory mood,” Burkhart said. “Getting to know Lois outside of AAT was really a privilege.”

“She did not have a negative bone in her body,” added Animal Assisted Therapy volunteer Annette Leber. “She was very up, optimistic and laughed a lot — laughed heartily, too.”

Lois Kirkwood loved the ocean, Burkhart said, and she and her husband owned a getaway cottage in Nags Head, N.C.

“Jim wasn’t too keen on it,” Burkhart said about the cottage. “After he died, she went there often.”

Lois Kirkwood was on her way to Nags Head in 2015 when severe stomach pains prompted her to turn around and come home, Hoover said. Shortly thereafter, she learned she had cancer.

“You just didn’t hear her talk about herself, her illness,” Hoover said. “She just took it like a champ.”

In the last year of her life, Lois Kirkwood started finding new homes for her possessions. Her house and land in Frederick County were donated to Mount Olive United Methodist Church, and JoJo and a beloved stuffed bear given to her decades earlier by her father went to family friends. Lucky had already passed on after a long life of helping others.

Everyone who spoke about Lois Kirkwood said she never sought attention for her good deeds.

“I think if she was here and you said, ‘I’d like to do an article about you,’ she’d wave you away,” Trant said

Ironically, Lois Kirkwood never wanted fanfare for her charitable acts, but she’ll be remembered for generations by people whose lives are bettered by her parting gift to the Community Foundation of the Northern Shenandoah Valley.

“I was truly blessed to have her in my life,” Leber said.